I used to be a globe-hopping environmental activist. I went to climate change conferences in Montreal and Copenhagen. I travelled regionally, too, to Richmond and Annapolis, to harangue legislators. The travel made me part of the pollution problem, of course. But I bought “carbon offsets” to compensate, saving Amazon rainforests.

Now, like you, I’m quarantined. On the 50th anniversary of Earth Month, I occupy a roughly 10-square-block universe around my house. Yet I’ve discovered four new activities that give me the power to act locally – and I mean inside my house and neighborhood – while keeping global climate change at the center of my activist life.

So cue the drum roll. Here’s a summary of four cool activities I’m taking this Earth Month, followed by more details below. 1) I’m saving hundreds of local trees with my bare hands; 2) I’m writing hundreds of letters to out-of-state swing voters; 3) I’m riding a bike to protest Big Oil companies; and 4) – perhaps most important – I’m laughing a lot. I seek out laughter more than ever. My comedian friend Robert Mac reminds me that jokes can go viral too and that laughter is contagious. So we’re organizing the first-ever zoom comedy show to celebrate Earth Month and support a local food bank. Buy tickets here.

Now, in more depth, here are the four things that keep me sane and busy – and that might help you too: 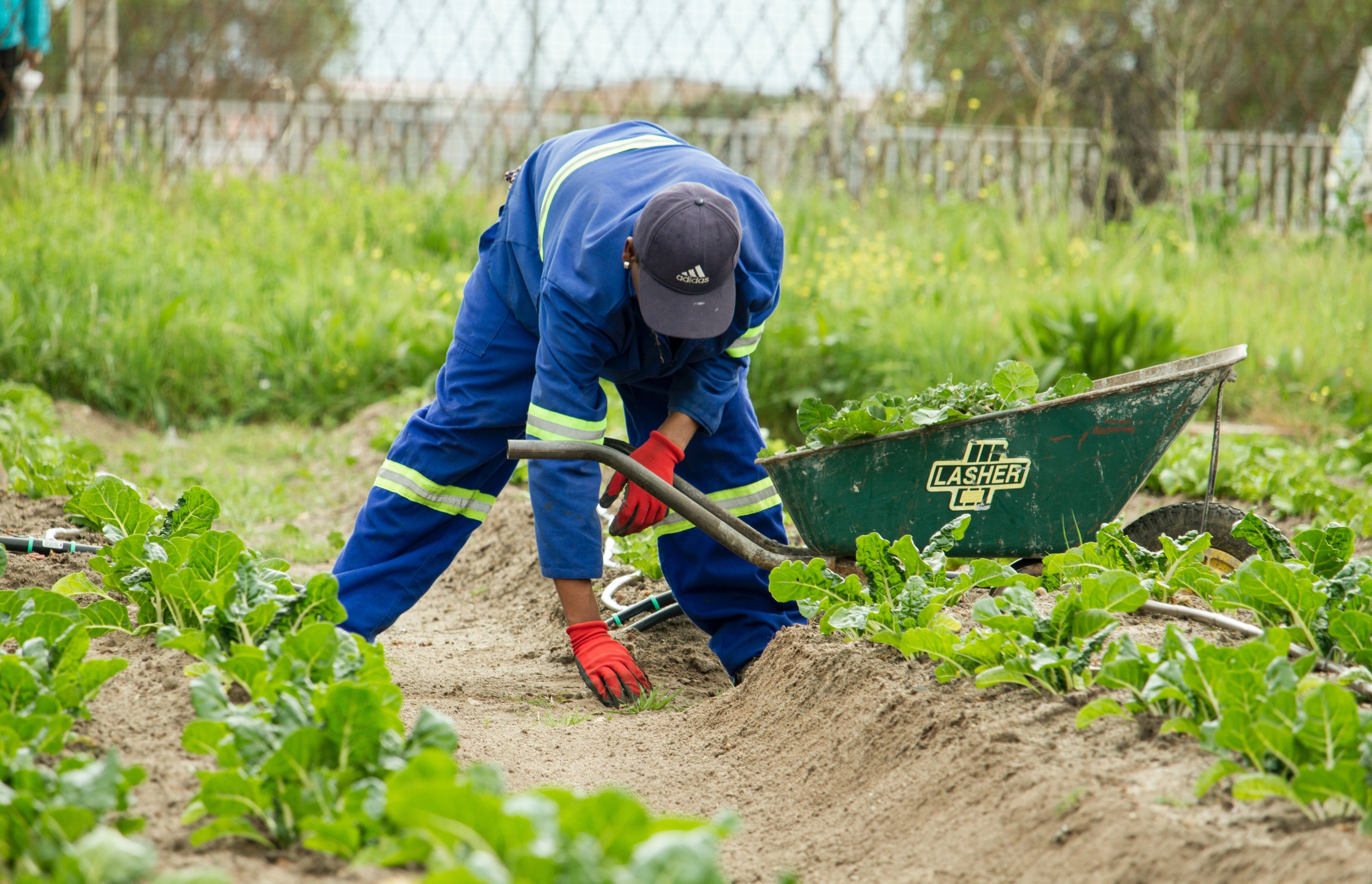 EARTH MONTH ACTION #1: Saving hundreds of trees in my neighborhood – Every day I keep at least one tree, and sometimes as many as ten, from falling to the ground, decomposing, and making global warming worse.

It began with the biggest tree in my neighborhood, about 10 blocks from my house. That tree is at least 150 years old, a tulip poplar. I first noticed it from atop a high-rise office building where I live in Takoma Park, MD. The tree hovered in the distance, twice as tall as the rest of the urban canopy in my neighborhood, which overlaps Maryland and Washington, DC. It’s a magical tree, a giant at least 90 feet tall.

I set off one recent morning to see the tree up close. I take more walks in this world of social distancing. When I arrived at the corner of 6th and Butternut Streets, NW, I was both amazed and horrified. The tree’s trunk – 14 feet in circumference – was supporting a vast network of titanic branches shading much of the block.

But then I noticed the tragedy. The tree was being strangled to death. Half of its massive, godlike body was covered in, and choking from, English Ivy.

Multiple studies show that rising CO2 levels worldwide act as a “super fertilizer” to noxious weeds and vines like English Ivy and wisteria. But it took a viral pandemic to get me walking more and seeing the mass death these vines are bringing to my own neighborhood – and yours.

A few days later, my son Sasha and I needed only about 20 minutes to save the 150-year-old tree. With the permission of the homeowner (friendly but ivy “blind”) we used garden clippers and a simple pruning saw to remove a thick matt of ivy vines at the base of the tree, thus dooming the climbing vines above us. Twenty minutes to save a tree that’s been growing for one and a half centuries!!

Now I’m obsessed with saving trees from ivy. I hand out this educational flier at every house I see on my morning walks where trees are being choked. I estimate there are at least one thousand – one THOUSAND – trees dying from noxious weeds within ten blocks for my house, each of which can be rescued within a few minutes. My goal, this Earth Month, is to personally save 100 of them and to recruit my neighbors to save the rest.

That’s a total of 1000 tons of carbon dioxide sequestered over the lifetime of those trees, by the way – a ton per tree. My 100 trees alone offset my personal carbon footprint for about 10 years! I know we need to plant trees by the billions worldwide to help fight climate change. But we’ve got to save what we already have too. Won’t you join me during your own pandemic morning walks? Learn more here and here.

EARTH MONTH ACTION #2: Writing letters to potential voters in swing-state Pennsylvania – So this one’s a no-brainer. A nonprofit called Vote Forward allows you to personally write voters in several key states and encourage them to vote. Vote Forward targets folks in Democrat-leaning districts who historically have not voted. The process is super simple. You sign up. They send you as many letters as you want to write, with the voter’s name and address already displayed. You hand write your encouraging letter. Then you sit on the letters until October and mail them in. I’m in the process of writing 100 letters now to residents of Pennsylvania. Will you join me? You can also pick other target swing states like North Carolina and Texas.

EARTH MONTH ACTION #3: Riding a bike to draw attention to oily banks and dirty companies – Okay, for this one I’ve got to leave my neighborhood to get political. On April 30th, my friends at #ShutdownDC are planning a safe and creative bicycle action as part of their “Earth Day to May Day” series of activities. We’ll be keeping our distance, riding in pairs or solo, as we swing by the offices of some of the world’s worst climate criminals in Washington, DC. Sign up for more information on the bike ride here. If you just want to take in the activities by zoom, sign up here.

EARTH MONTH ACTION #4: Laughing and laughing. The first-ever CCAN comedy show to raise money for a local food bank — Now, more than ever, we need the medicine of laughter as we save Mother Earth. Every day, I find myself going out of my way to try to find humor in the world and share it with others. That’s why the Chesapeake Climate Action Network is so excited to sponsor DC-area comic Robert Mac and his hilarious show “Comedy Night for Earth Day.” It’s a one-hour Zoom comedy special that will premiere on Thursday, April 30th, 8 pm. Tickets are just $10. Proceeds go to the Capital Area Food Bank.

Robert Mac has a skill for bringing humor even to the topic of climate change, with laugh-out-loud results. Did you know, for example, that by switching to the metric system we can reduce future global warming in the U.S. from 7 degrees to 2 degrees? Overnight! Mac has been a grand prize winner of Comedy Central’s Laugh Riots and has been featured at the prestigious Just for Laughs festival in Montreal — among other honors. He is one of the best “environmental comics” in the nation. You can check out some of his “50 Ways” tips here. For every $10 ticket sale we donate, the Capital Area Food Bank will be able to feed 25 people in this time of need. So RSVP now and tell all your friends. CCAN is proud to host this first-ever online comic show devoted to climate humor and virus justice.

EARTH MONTH WRAP UP: So there you have it. Four ways to keep you busy fighting climate change super close to home during a global pandemic. And here’s a PS: On April 24th at noon ET, CCAN is also hosting a cool hour-long program of music, yoga, and activism via zoom as part of the Earth Day Live event streaming worldwide. Sign up for our program here. Learn more about Earth Day Live here.

In the meantime, stay safe, stay sane, stay active, and laugh whenever you can. 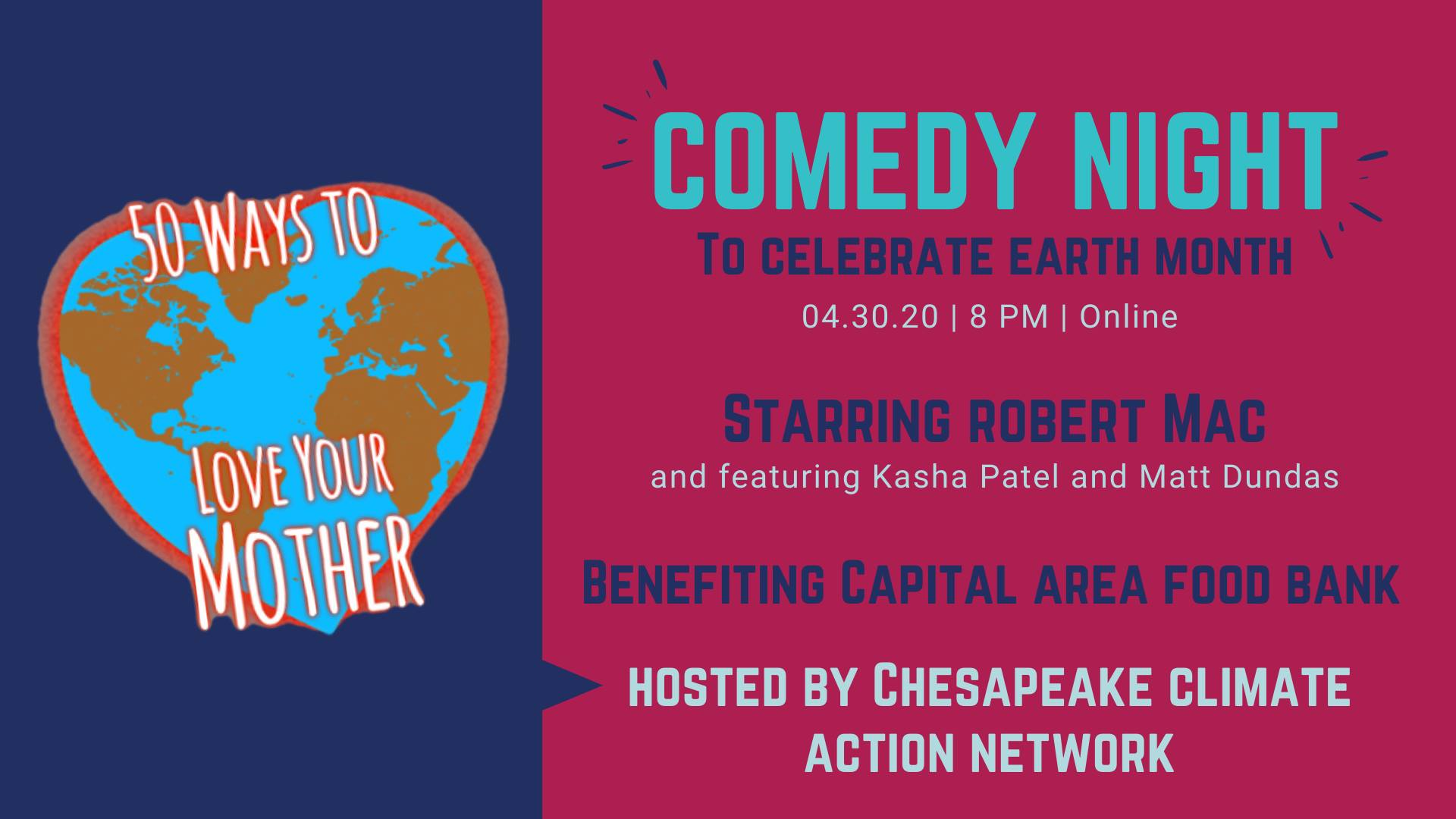