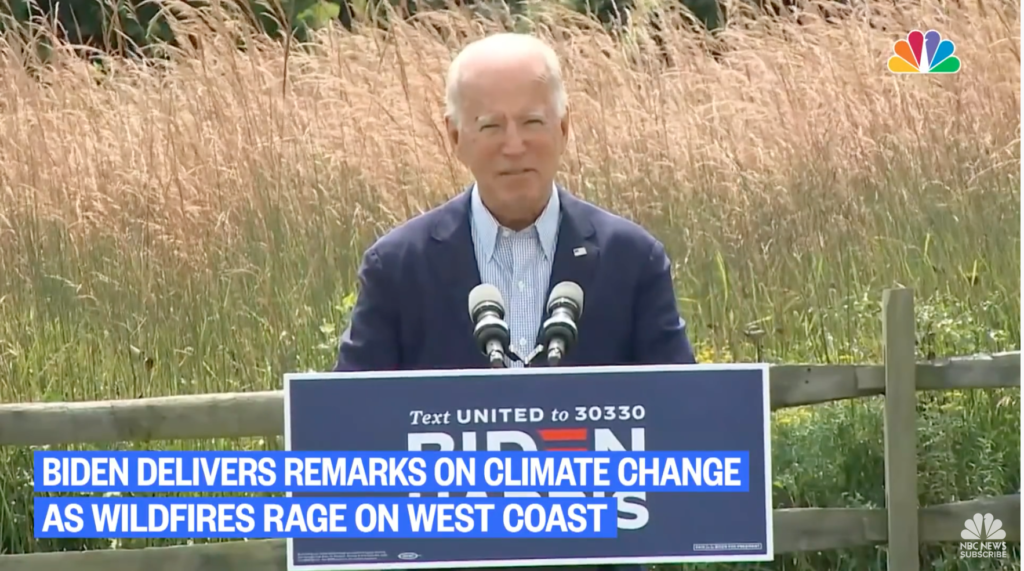 Joe Biden, instead, has a plan to get America’s power grid off fossil fuels by the year 2035. He’ll create two million new jobs in the process, alleviating the COVID-19 recession.

So it’s time to be partisan. It’s time to choose sides. This election is too important.

Today, the CCAN Action Fund is announcing its wholehearted endorsement of Joe Biden as President of the United States.

We agree with the esteemed magazine Scientific American. Last week the magazine endorsed Biden, ending its own 175-year run of not embracing candidates. The editorial board wrote, “The evidence and the science show that Donald Trump has badly damaged the U.S. and its people…It’s time to move Trump out and elect Biden, who has a record of following the data and being guided by science.”

Joe Biden acknowledges that the rampant wildfires and rolling blackouts out West are driven by fossil fuel combustion. He understands and accepts that 100-degree temperatures in the Arctic this summer and a record hurricane forecast in the Atlantic are the results of manmade climate change.

Joe Biden also knows that for every dollar invested in the solution – clean energy – three times more jobs are created than in fossil fuels.

But we have to get Biden elected first. And that will be no easy task. The first step is to ignore the polls. The website FiveThirtyEight gives Trump a 25 percent chance of winning right now. One in four chance. How do we sleep at night, given the stakes? FiveThirtyEight also says that if Trump wins Florida – where he is neck and neck with Biden – his chance of winning the full election is 57%!

CCAN Action Fund has never endorsed a political candidate before. Please help us defeat Donald Trump, the “climate arsonist.”  Help us elect Joe Biden. Choose one or more ways to volunteer with us today.

CCAN Action Fund is heeding that call, making our first-ever presidential endorsement today. But as AOC says, it’s not just about the President. We need a new US Senate as well if we are going to save our climate and preserve our shared values of quality health care, labor union rights, and racial justice.

Which is why, today, CCAN Action Fund is also endorsing in two key US Senate races here on the East Coast. We passionately endorse North Carolina Democratic Candidate Cal Cunningham over incumbent Republican Thom Tillis. In Maine, we endorse Democrat Sara Gideon over incumbent Republican Senator Susan Collins. Democratic victories in these Senate races will help create a Democratic majority in the next Congress to help pass transformative climate legislation in 2021. Sign up to volunteer with us and we’ll show you how you can help in both Senate races.

There are just 42 days before the election. People are already voting in eight states, including North Carolina. No one is going to do the hard work for us. WE have to do it. WE have to be courageous. WE have to organize at an unprecedented level.