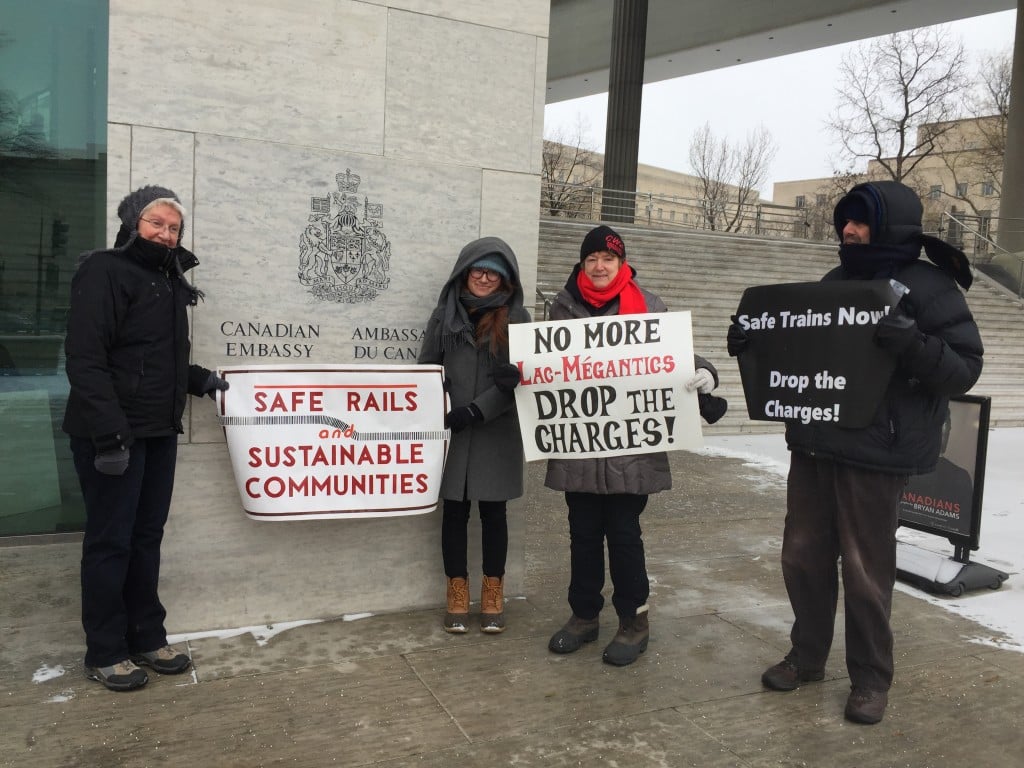 Last week, a small but mighty group braved the bomb cyclone in DC to rally for rail safety outside the Canadian Embassy. We were there to stand in solidarity with the scapegoated rail workers currently on trial for the deadly 2013 crude oil train derailment in Lac-Megantic, Quebec.

On July 6, 2013, a freight train carrying 72 tank cars of crude oil derailed in the small town of Lac-Megantic. Many of the town’s residents were gathered at a local bar for a birthday party when the runaway train barreled into downtown a little after 1:00 in the morning. When the train derailed at a sharp curve in the tracks, its highly flammable cargo exploded and wrought devastation, killing 47 people, orphaning 27 children, destroying 44 buildings, and leaving 160 people homeless.

Over four years later, the criminal trials for this tragedy are about to conclude. Yet the wrong people are being blamed.

The rail company that operated the ill-fated train, Montreal Maine and Atlantic Railway Ltd. (MMA), is not being held accountable for its dangerous policies and poor safety regulations that made the derailment inevitable. Instead, rail workers Tom Harding and Richard Labrie each face one count of criminal negligence causing the death of 47 people in the Lac-Mégantic crash.

While the prosecution has focused on the number of hand brakes that engineer Harding applied on the train before parking it for the night, the Transportation Safety Board report on the disaster paints a more comprehensive picture. After reviewing the TSB report, a chemical engineer at the Université de Sherbrooke concluded, “the company has tolerated improper braking practices, did not provide appropriate braking practice and did not ensure the employees were properly trained and demonstrated that they understood the training.”

What else do we know about the conditions that led to the derailment? The train was illegally overloaded, weighing 2,800 tonnes over the legal limit. There was a mechanical breakdown on the locomotive two days before the derailment, but MMA officials allowed the train to operate anyway. And the inspector of the locomotive had little experience, only having begun inspecting trains solo a few weeks before.

Yet the policy that most rail safety advocates point to as the key culprit in this case is the inherently dangerous one-person crew practice imposed soon before the tragedy. To increase profits, rail companies like MMA have been decreasing crews from four, three, or two people to only one person. When MMA made this change, the only action the company took to protect that remaining one-person crew member was to require the installation of a mirror on the conductor’s side of the train.

That’s right: a mirror was expected to replace a second and even third skilled worker.

Though it is clear that lax regulations and unsafe railroad management policies led to the tragedy in Lac-Megantic, engineer Tom Harding and traffic controller Richard Labrie are facing exclusive blame for the incident. They face life in prison for a tragedy that their employer made inevitable by cutting corners. Further, if the workers are convicted of criminal negligence, the reckless policies and lack of regulatory oversight that caused the disaster will not be changed. The conditions that led to the tragedy in Lac-Megantic will remain the norm, continuing to put communities along rail lines in danger.

In Baltimore, we have an opportunity to make real progress in the fight against dangerous crude oil trains. In October, 11 members of the City Council introduced an ordinance to zone out new crude oil terminals, which will limit dangerous crude-by-rail traffic in the city while protecting our climate from this polluting crude oil. Contact your City Councilmember and urge them to support the Crude Oil Terminal Prohibition (City Council Bill #17-0150) to protect Baltimore from becoming the next Lac-Megantic.