WASHINGTON – In the wake of alarming federal and international climate reports, elected leaders of the District of Columbia — representing nearly 700,000 people in the nation’s capital city — today voted unanimously to mandate that 100 percent of the city’s electricity come from clean renewable power by the year 2032. This represents the strongest legislative mandate of its kind of any city or state in America and one of the strongest in the world. Today’s Council action toward 100% clean electricity is a preliminary vote and will be followed by a final scheduled vote in December. But the core features of the legislation are expected to become final law by Christmas.

The “Clean Energy DC Omnibus Act of 2018” also creates enormous incentives for electric cars, sets groundbreaking efficiency standards for new and existing buildings, and expands a carbon fee on natural gas and home-heating oil. It then invests that carbon revenue in a special “Green Bank” for clean energy loans and in efficiency and solar programs for low and moderate income residents. Here’s a summary of the bill’s main features. 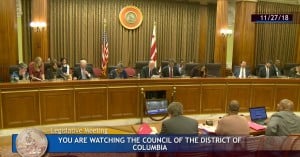 “This is an extraordinary bill that sets a new bar for the rest of the nation on climate action,” said Mike Tidwell, Director of the CCAN Action Fund, a sister group of the Chesapeake Climate Action Network. “This bill was two years in the making, involved everyone from neighborhood moms to top business leaders to champions on the DC Council. We’re going to send clean energy to the White House and members of Congress whether they’re ready for it or not.”

CCAN Action Fund extends special thanks to Councilmember Mary Cheh (D-Ward 3) for her dogged leadership in working with advocates to write this bill and seeing it through the legislative process so far. And thanks to Councilmember Vincent Gray (D-Ward 7) who as former mayor of the city set a guiding vision for action with his landmark Sustainable DC Plan. And thanks to leading supporters, including the DC Chapter of the Sierra Club, Citizens Climate Lobby, Interfaith Power and Light, Moms Clean Air Force, SEIU Local 32BJ, 350DC, DCEN, and many others. 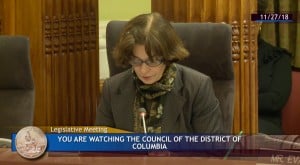 “This bill should be a boost to advocates nationwide,” said Camila Thorndike, DC campaign director for CCAN Action Fund. “Finally some good news out of Washington. We did it. The people of DC ignored our delinquent federal leaders and made 100 percent clean power a reality for our city over the next decade. If we can do it, states across America can do it too.”
With no utility-scale electricity generation in DC, the pathway to 100% clean power can happen faster for DC than most states, but the DC bill still sets a very high bar. California has set a goal of at least 60% clean electricity by 2030 and Maryland, next door, is poised to pass a 50%-by-2030 renewable electricity bill in early 2019. Both states are looking to get to 100% clean electricity at some point soon after 2030 but have not finalized plans.

“We invite other states to set their goals very high for clean power and then fight like hell,” said Thorndike. “That’s what we did in DC and what others thought was impossible is now going to happen. We are thrilled.”

The legislation also authorizes the District to put a price on transportation fuels if Virginia and Maryland commit to the same. But in a disappointment, the Council refrained from voting down a concerning amendment that could undermine the energy efficiency portion of the bill and could have a negative impact on DC ratepayers. The amendment, which was added in by Exelon-Pepco days before the vote, would give Pepco authority over how efficiency investments are made, undercutting the longstanding decisions DC has made to support independent-run efficiency programs instead. Activists expect this amendment to be addressed in the second reading instead.

The bill would create efficiency standards for new and existing buildings and would fund local programs to assist low-income residents as the District transitions to more sustainable clean energy systems. It would also adjust the vehicle excise tax to incentivize clean cars and make owning dirty vehicles more expensive. The legislation also authorizes the District to put a price on transportation fuels if Virginia and Maryland commit to the same.