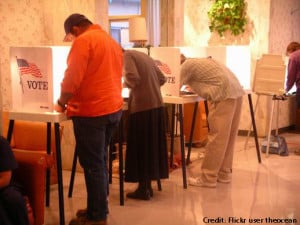 Time is running out for this election season. The debates are over and campaign literature is filling our inboxes and mailboxes. The gubernatorial candidates have exchanged volumes on how best to move Maryland forward.

At the same time, new studies show that time is also running out to take bold action on climate change. The Union of Concerned Scientists (UCS), for example, issued a report this October that forecasts accelerated flooding from sea level rise for many East Coast cities, especially Annapolis, Baltimore and Ocean City. Numerous studies and reports indicate that climate change, triggered by our fossil-fueled economy, is increasingly disruptive and expensive. Scientists say the only answer is to shift our economy to renewable energy. As quickly as possible. Along with that shift, we’ll get the benefits of cleaner air, land and water, a more robust and resilient economy — and lower health-care and disaster-related costs.

Polls show Marylanders are very much on board. A George Mason University poll showed large (and growing, when compared with an earlier poll) majorities favor more solar and wind energy in Maryland — and are willing to pay a bit more to make that happen. And most Marylanders are NOT interested in swapping out one fossil fuel for another. In a recent Goucher poll, about two-thirds of those familiar with fracking for natural gas said the state should discourage it because of environmental concerns; half said it should be banned.

So, where do the gubernatorial candidates stand on these critical questions for our state’s future?

While Larry Hogan says he accepts that the Earth’s climate is changing and that “humans have something to do with it,” he adds that “the question is how much and what we can actually do to solve the problem.” He has said, “I don’t know that the governor of our tiny little state of Maryland is going to stop the climate of Earth from changing all by himself.” He has given a grade of “F” to nearly all the state’s renewable energy goals, including participation with eight northeastern states in efforts to reduce greenhouse gases, and he has called efforts to develop offshore wind farms in Maryland a “huge waste.” As an “all-of-the-above kind of guy” on energy, he says natural gas is a “clean energy.” Fracking is “critical to our state economy,” Hogan says, and “we’ve been studying it to death.”

Anthony Brown says addressing climate change would be a priority for his administration. He vigorously backs the state requirement to reduce greenhouse gases by at least 25 percent by 2020, a policy established during the O’Malley-Brown administration. Generating more solar and wind energy, he said, is important “not only for climate change but for creating jobs in Maryland and … [for] us to begin seeing much more affordable and reliable energy in Maryland.” He says he would provide tax credits to make energy efficiency upgrades more affordable for homeowners, businesses and industry, and continue interstate cooperation to reduce climate pollution. He has said he will not allow fracking unless the state’s studies show the risks to be acceptable: “While the energy potential of the Marcellus Shale represents an enticing economic opportunity, we will not accept a process that jeopardizes our families or environment.”

The decisions made by our next governor and General Assembly will determine whether Maryland continues, and even strengthens, our leadership on clean energy and climate solutions, or whether we fall dangerously behind. The consequences matter tremendously for Marylanders. That Union of Concerned Scientists’ report shows tidal flooding in Ocean City, which happens about eight times a year now, will occur about 30 times a year by 2030 and 170 times by 2045. Annapolis is in for more than 180 tidal floods a year by 2030. That’s nearly every other day. UCS estimates that Baltimore’s Inner Harbor area will be underwater for more than 875 hours a year —10 percent of the time — by 2045. As UCS points out, this disruption can bring power outages, interrupted cellphone coverage, impassable roadways, flooded basements, damaged homes and lower property values.

So, climate voters, get to the polls. Let politicians know you want strong action on climate change. You want policies that will yield more renewable energy and more energy efficiency for Maryland. Decisions made in this decade will make all the difference in whether we have livable communities for ourselves, our children and future generations.